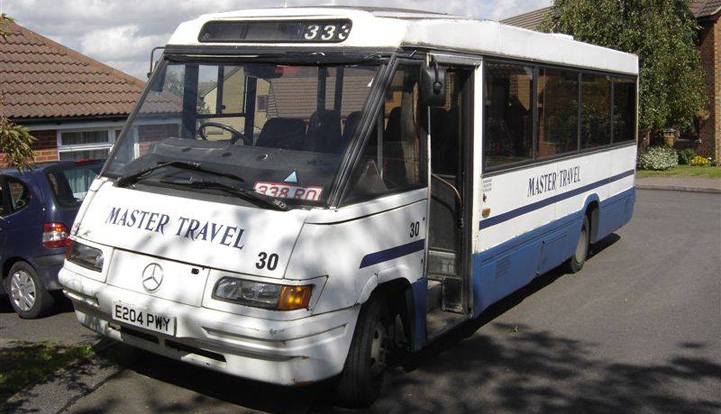 2004 was new in November 1987 as a coach seated Mercedes Benz 811D with coachbuilt Optare Star Rider body (body number 245), one of the first of this model, which Optare developed as a slightly larger offering than its 19-25 seat City Pacer body on the Wolkswagen LT55 chassis. Yorkshire Rider ordered four Star Riders, 2001 and 2002 (E201 PWY and E202 PWY) with 33 lower-backed seats (though still more comfy than typical bus seats) and 2003 and 2004 (E203 PWY and E204 PWY) with 29 high-backed coach seats. Whilst many Star Riders (and City Pacers) were built, the success of both products was curtailed somewhat by Optare acquiring the rights to the MCW Metrorider integral vehicle which won over the stage carriage class at least. The last Star Riders were registered in September 1994 (M923 TYG, M928 TYG and M929 TYG) giving a seven year production run.

Our quartet were initially allocated to Bradford (routes including the 700 Shop Hopper that the Cubs before them were used on) then moved to Huddersfield (route 841 to Oakes being a usual route) followed by being transferred to Leeds in 1994, but all except 2003 gone by early 1996 (as an interesting aside, they came to Leeds along with a Mercedes 709D given fleet number 2005, this had 25 coach seats).

I have learnt from a correspondent that 2004 suffered severe fire damage in 1988 and had to be rebuilt, it seems as though this was done on the same basis as the original pattern though. 2001-2004 originally had a standard minibus moquette, however 2004's seats were recovered some time between it leaving Yorkshire Rider and arriving at Mastertravel - they are however still the original seats. All four were delivered in a silver version of the Yorkshire Rider/Gold Rider/Micro Rider livery (badged Star Rider) followed by all gaining standard bright green and jonquil Yorkshire Rider later single deck livery in the early 1990s whilst at Huddersfield. Its immediate owner after Yorkshire Rider is at present unknown, however it was acquired by Sassarini of Wemyss Bay (who also had 2003) in August 1998 and sold to MasterTravel of Welwyn Garden City in May 1999. MasterTravel operated it until June 2006, their contract then calling for a larger, newer vehicle, and so they kindly made the vehicle available to our group for a nominal price. The vehicle was collected on 1 September 2006 and faultlessly driven home to Yorkshire. Some bodywork (front nearside pillar) is needed before the vehicle will be used again, and a respray into Silver is likely to be done at the same time.

2004 is so far the first vehicle in our fleet to be acquired with a currently-calibrated tachograph - if nothing else, this will save a moderate expense which can go towards its repaint, or other rectification.

Just as 1705 and 1807 go together as a pair, 2004 has a good match - the only Optare City Pacer with coach seats delivered to Yorkshire Rider, 1700 D901 MWR, which is in preservation in Yorkshire with a different group - it would be nice for 2007 if all five preserved WYPTE/Rider Optare bodied vehicles could be reunited, or should we say united for the first time, as 1705 and 1807 were withdrawn before 1700 and 2004 were actually delivered.