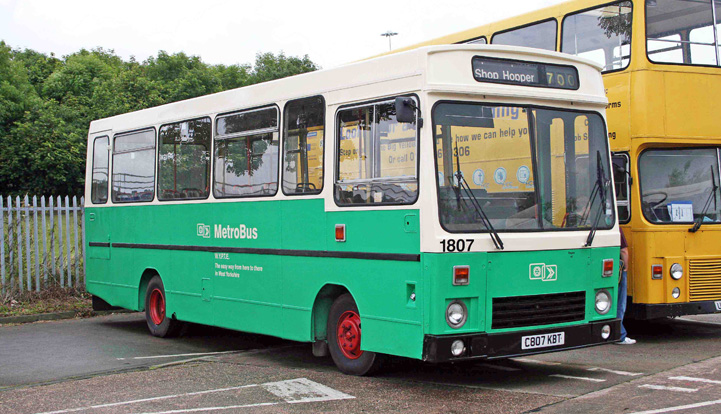 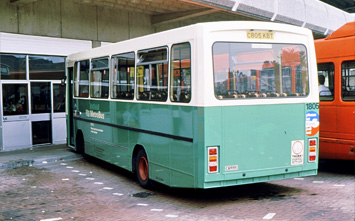 Introducing WYPTE 1807, which has recently returned home to West Yorkshire after over seventeen years away.

1807 was first registered on Valentine's Day 1986. It was initially allocated to Hall Ings garage, Bradford. It is pictured above on the Forecourt outside Bradford Interchange (note the Verona Green clock in the background). In October 1986 it transferred to Leeds Sovereign Street and became part of the Yorkshire Rider Leeds fleet.

1807 has a little brother, also from the Optare stable. 1705 is an ex-West Yorkshire PTE Freight Rover Sherpa with Optare coachbuilt body. This vehicle is currently under restoration.

Back to the Cub story, which also includes the Sherpas... Yorkshire Rider inherited a mixed fleet of vehicles, the majority ordered by the PTE in the mid-1970s and early 1980s, some vehicles from Leeds City Transport and Calderdale Joint Omnibus Committee, and some newer vehicles. A number of these newer vehicles were leased (the Cubs, the Sherpas, some Olympians, 8 of the Alexander bodied Metrobuses and possibly others also). As Yorkshire Rider did not want to pay leasing charges, these vehicles were disposed of, and the older Atlanteans and Fleetlines retained.

The strange thing is that, even though the Cubs lasted less that a year in West Yorkshire, thery managed to carry four different liveries across the class: 1801-1804 (which were built with 27 coach seats) were delivered in MetroCoach livery (as were all the Optare Sherpas), 1805-1808 and 1811-1815 were delivered in Verona Green and Buttermilk, and 1809 and 1810 were delivered in a yellow Bradford ShopHopper livery. In 1987, 1804-06 were repainted into Yorkshire Rider livery. 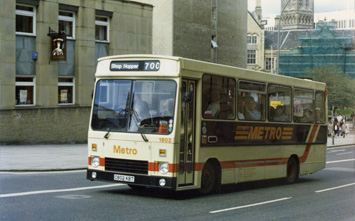 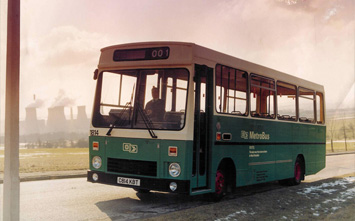 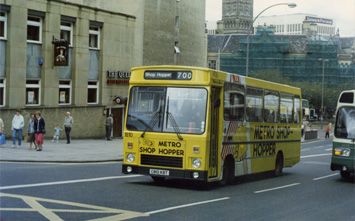 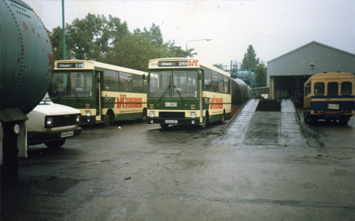 The Kirkby Central concern (made famous by acting as disposal agents for many ex-GMPTE vehicles) was appointed to dispose of the Cubs. 1807 passed to Kirkby Central on 8 May 1987.

On 8 June 1987, it was acquired by Owen's Coaches of Oswestry. On 14 November 1988, it moved to Maun International Coachways Ltd of Sutton-in-Ashfield, with whom it is depicted below in Newark Bus Station (please note that the logo on the front of the vehicle reads "Maun" whereas the DVLA history paperwork reads "Mawn"; note also that the livery seperation is identical to the divisions between buttermilk, verona green and the black bumper that it carried in our first illustration). 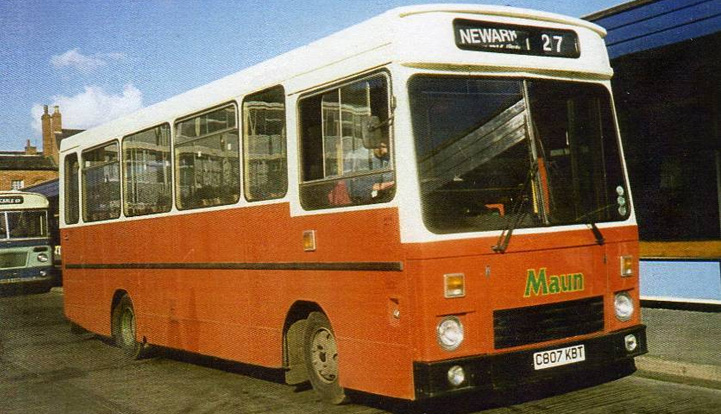 On 27 April 1990 it passed to East Midland Motor Services Ltd of Chesterfield. On 12 October 1992 it was on the move again, to Martins Coaches of Stone, quickly followed by Boomerang Bus Co of Tewkesbury in November 1992. 11 August 1993 saw it move to Saffords Coaches Ltd of Sandy with whom it stayed for six years. 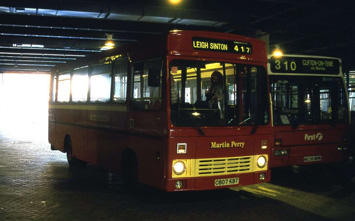 1807 pictured with a subsequent owner

2 September 1999 saw it back up north, to Mawn International Travel Cons of Sutton-in-Ashfield. On 7 February 2001 it passed to Balmoral Coaches Ltd of Liverpool, then on 7 July 2002 it passed to Pilkington Buses, of Accrington. Pilkington initially intended to use it as a driver trainer vehicle, however the introduction of a minimum length of 9 metres (just under 30 feet) for vehicles acceptable for a category D (PSV) driving test (which the cub at 26 feet did not comply with) saw that plan abandoned, and the vehicle was stored, occasionally being driven around their yard, but not beyond. The vehicle's last MOT (as a class VI) expired in April 2003. 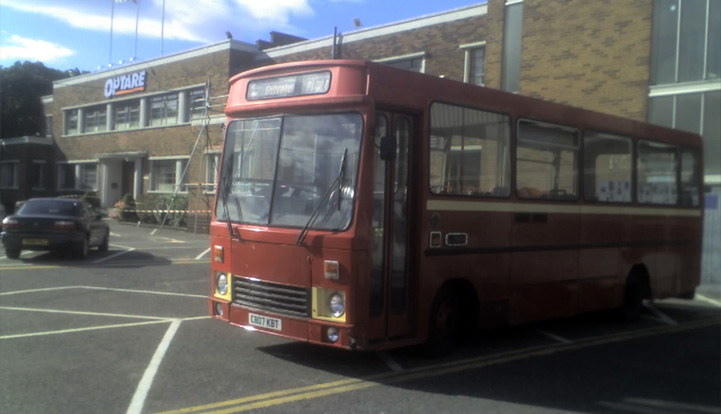 1807 returns to Leeds. Pictured at the Optare factory

1807 received verona green and buttermilk livery in time for the 20th anniversary of the demise of the Passenger Transport Executives as bus operators in Britain. It has attended several rallies.

The owning group enjoyed a very proud moment in August 2005 when, as pictured above, the vehicle returned to its birthplace where it was posed outside the finishing shop and main office block of Optare Limited. 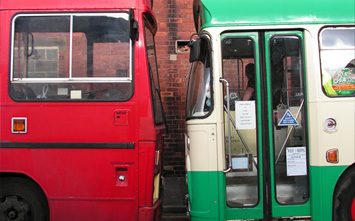 WYPTE only ordered two midibus designs (although it also trialled the Seddon and the Domino from GMPTE and SYPTE respectively); the Bristol LHS and the Leyland Cub. It is therefore particularly pleasing that a representative of each is saved. They are seen here getting to know each other for the first time (as they never operated in West Yorkshire concurrently) at the Dewsbury Bus Museum open day in March 2005.

For completeness, I am trying to compile some record of Leyland Cubs that were built for other UK bus operators. I am aware that Lothian had a batch with Duple bodywork, and that GMPTE had two with Reeve Burgess bodywork (of which one, 1702 (B702 UVR) survives with the SELNEC Preservation Society. But presumably there were other Cubs too.

Compiling a list of vehicles fitted with this style of Optare bodywork is much easier, as there were only these fifteen Leyland Cubs for WYPTE and fourteen Dennis Dominos for SYPTE ever fitted with it. The only other Dennis Dominos to be built were with Northern Counties bodies supplied to GMPTE, of which the SELNEC Preservation Society have the sole survivor, 1751 (C751 YBA).